Counter clockwise circumnavigation of Lismore from the layby opposite the middle of Shuna (OS 929 492). Plenty of parking space and OK launching spot but somewhat rocky and awkward. Lunch at Castle Coeffin. Small portage between Bernera and Lismore as arrived at low tide. With rising tide at Rubha Fiart at South end of Lismore there was quite fast tidal flow E-W – one capsize on entering the flow. Camped at OS 786357. Good spot although foreshore covered in slurry, seaweed and dead sheep so somewhat malodorous!

Sunday mostly sheltered from the wind. Mid morning stop on bar between Eilean na Cloiche and the southerly Eilean Dubh. Lunch at Port Moluag with an intention of visiting Tirefour Castle but no ready access. Would have been better to stop at beach on West of Eilean Dubh.

After a spell of windy conditions and decisions whether to run clockwise or anticlockwise a settled forecast of light Easterlies and Southerlies appeared and the initial plan to go clockwise was confirmed.

Sat 4th
0930 Departed Colintraive Old Pier on last of S going tide. Bute shore held to avoid what was a weak N. going tide for most of day. Coffee stop at S. side of Kames Bay. Lunch off Mount Stewart and walk around grounds. Look at Kilchattan camping and despite proximity to a pub decided on the wonderful remoteness of Glencallum Bay. Enough firewood obtained from the beach, dinner and mercifully few midges. Approx. 30K, Wind E F2-3, sunny

Sun 5th
10:00 start and quiet rounding of Garroch Head. Coffee stop at Dunagoil Bay, lunch at Stravanan Bay, a look round Scalpsie Bay and onto Inchmarnock for the night. Camped on S. facing bay at the SE corner of the island. Walk up to the trig point via the abandoned steading called Midpark. Beach fire, dinner while as darkness fell, watched in the distance a returning submarine off Arran await its escort home.
Approx. 15Km, Wind F1-2 S & E, sunny.


Mon 6th
10:00 start and run up the E side of Inchmarnoch to view from the water Mid & North Parks plus alternative camping at the top of the island. Many inquisitive seal families came to inspect us. Crossing to the mainland and stop at S. end of Blindman’s Bay. Lunch in the Kames Hotel. PM on up the W. Kyle crossing at Rubha Ban to the Bute shore and the Maids, S. of the Burnt Islands and back to Colintraive for 1630.
Approx 21K, Wind Wind E F2-3, sunny.

Started at Polanach layby (OS 938505) in fine conditions. Wind had been forecasted to pick up in the afternoon from the NW but either it did not appear or was delayed, or we were sheltered. Paddled round the outside of Shuna and through the skerries to lovely beach on NW end of Lismore for lunch. From there paddled round the islets by Port Ramsey and on to Eilean nan Caorach and from there across to Castle Stalker. Tide was quite confused as we crossed and wasn’t always flowing in the expected direction.

We don’t normally post for these but as 24th May was the first session of 2022, here’s a couple of pics…

We launched at Letter, just south of Coulport MOD site at first lay-by. Not the best access as you have to climb over a road barrier but OK. The weather when we arrived was very calm, warm and sunny. The forecast was to get windy in the afternoon up to a force 4 from the south so we changed our plans and decided to head straight across the Loch towards Ardentinny.

The water was like a mill pond and we had a pleasant crossing, then headed south to the caravan park at Gairletter Point. We saw a few Harbour Seal who didn’t seem to bothered with our presence.

From here we crossed back to Eilean Beag (or Cape Cove as Bryan called it) and had a look at the modern house on the shore (used in the Nest TV series). We continued south to a lunch spot just past Cove sailing club. From here we could see signs that the wind was building, so after a short break we started to head north.

The water had become a little more lively as the wind had increased to a force 3 from the south. We had a bumpy ride, with the small, steep waves come from the aft port quarter, which was fun for all. The sea state calmed down quickly when we passed Eilean Beag and people had fun surfing the the smaller waves and enjoying the sunshine.

We continued to enjoy the small waves all the way back to the launch site, overall a fun day with a good mix of conditions.

Early season grade A trip on the Clyde to get people out on the water as a bit of a shake down paddle.  Original idea was to launch at Craigendoran and paddle towards Rhu, however the weather forecast was a F3 or F4 from the east so we moved launch site to Blairvadach to allow us to paddle into the wind first.  This worked well as it was very sheltered initially and allowed people to settle into things. Once we rounded Rhu spit the wind was in our faces, however it was an enjoyable sunny paddle down to Helensburgh Pier.  We had a break at the pier and enjoyed the sunshine and used the facilities.  No one had an ice-cream which was surprising….

We had a quick look at the new swimming pool building on the Pier before starting the return leg. The paddle back as a real joy as the wind was directly behind and the water flat, we went across the Gareloch to Roseneath and then returned to Blairvadach.

It was good to meet some new faces and enjoy the sunshine in company. 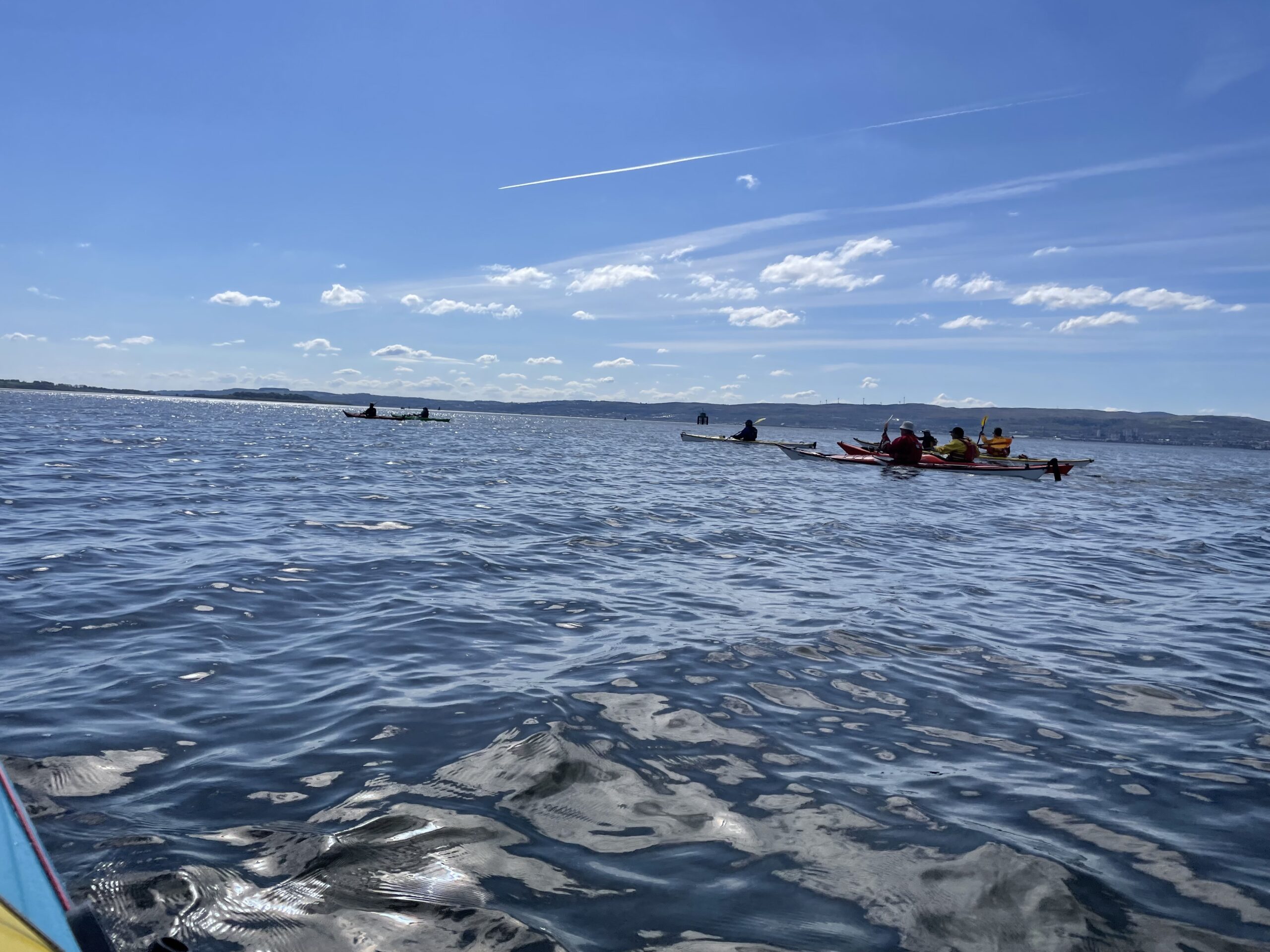 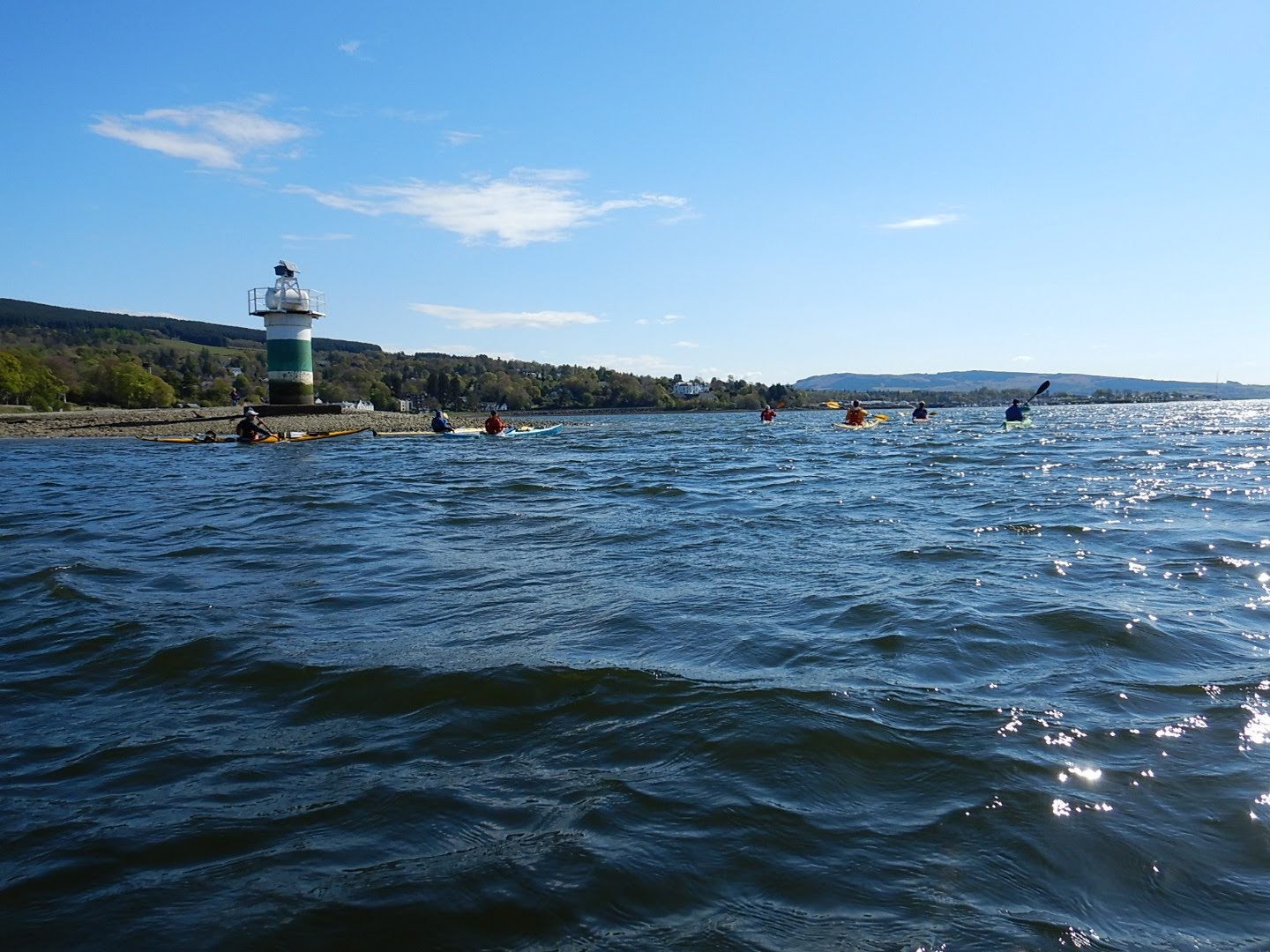 Last club trip of the year and a resurrection of an idea from the previous bothy trip in 2017 to Loch Awe.

The forecast though just allowing an outward and return trip from Helensburgh was revised for a more comfortable weekend, to a linear trip from Arrochar to Helensburgh.

Sat 4th
Met at Arrochar Pier 1230 for on the water at 1300. One car parked near church.
Pleasant paddle down the loch arriving to the bothy at 1500. Last of the daylight spent cutting wood. 3 other lads in the bothy. Good evening chatting, cooking and eating. The bothy nicely warming up as the evening progressed.

Sun 5th
One of the few great weather days in the past weeks and we get it again. Frosty morning and still dark as we prepared to depart the bothy after cutting some wood for the next residents.
Brief stop prior to Loch Goil entrance to allow a reduction of insulation as the sun appears. Mid morning break on Finart Beach followed by a crossing from Gairletter Point to Knockderry. Lunch at Kilcreggan still in the sunshine, followed by a home run into Helensburgh for 1500.

A simple day in local waters essentially planned for newer paddlers but in the event supported by others with more experience.

Departed RNYC pier approx. 1030 with 6 paddlers. Chat with MOD rib crew about our plans and need to stay clear of soon to be departing submarine from Faslane. Off Robert Ness we met up with Geoff and Andy who had departed from Craigendoran. Continued around Rosneath Point moving from fully sheltered water into a gentle SW wind, the departing submarine passing us in the main channel.

Lunch taken on the beach E of Kilcreggan Pier in the only strong shower of the day! Bonus in seeing 3 dolphins heading up the Clyde.

On the return we were overtaken by an incoming US submarine and its support tugs in the channel off Rosneath Bay. Geoff, Andy and Edward having broken away to return directly to their home beaches. The following wind and rising tide made a lovely paddle back

This day paddle was put on to replace the scheduled Soay trip which had insufficient takers (one). Plan was to take in the islands at the N end followed by a bit of the Orchy and then Kilchurn castle while looking at potential camp sites for future use.

First stop barely a kilometer away from launch point was the island of Inishail which has a ruined church and graveyard with both ancient and relatively recent use. Main users appear to be the Campbell Dukes of Argyll and families. Here is a good campsite but like the NE shore of the loch is used by the fishing fraternity. The little island of Fraoch Eilean has substantial ruined castle to look round and is also a possible campsite.

Up the Orchy for about a k to look around then back to Kilchurn. Despite quite a few visitors it was shut and we could only walk round the outside. Disappointed, it was suggested we visit St Conans Kirk (on OS map) in Lochawe village which had the appearance of something rather more than a simple kirk when seen from the water. And so it proved with the 19th century design and architecture of particular interest. Access to the kirk can be made through a railway underpass about 300m to the N. So more of a sightseeing trip than a kayak trip but that was intended.